Scholarly Communication Research Group is an interdisciplinary team that draws on the vast disciplinary backgrounds of its members to investigate the social dynamics occurring in the sector of science and higher education. One of the disciplinary perspectives strongly present in our research is philosophy. Recognizing the challenge of undertheoretization of our field, philosophy serves a double purpose in our investigations. First, by referring to the critical tradition, philosophy helps us to question objectified reality and unravel the deeper processes that impact and structure what both academics and students experience on a daily basis. Second, develop adequate conceptual tools to investigate them in a critical manner, that is exploring inner contradictions within the sector and reflecting on how to transcend them.

Our series of open seminars on the philosophy of higher education draws on this double purpose and offers a space to develop critical perspectives in a collaborative manner. Not only to expose forces at work within the sector but to collectively reimagine science and higher education beyond the contemporary predicament.

Registration required. Register in advance for this meeting: link

Louis Althusser was one of the foremost Marxist philosophers of the 20th century. His thinking laid the groundwork for critical educational theory, yet it is often misunderstood in critical pedagogy and sociology of education. In a new book, David I. Backer reexamines Althusser’s philosophy of education, presents its flawed reception in critical educational research, and draws out what the philosophy has to offer us today. Correcting the record about Althusser’s thinking in the traditional narrative of critical educational research becomes an opportunity to revisit fundamental questions for thinking about school in its social context. In this talk, Backer will focus on the book’s overall claims and a specific debate between Althusser and Rancière on the politics of higher education pedagogy. 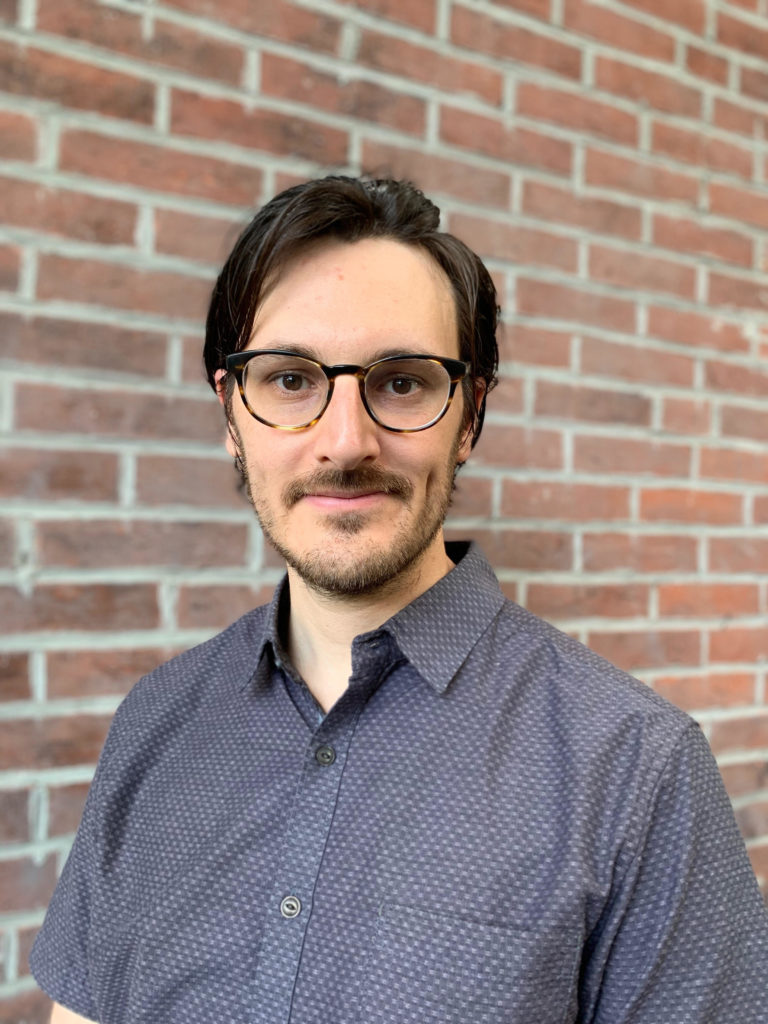 David I. Backer is an associate professor of education policy at West Chester University. Most recently his research and organizing apply a Marxist lens to the problem of school finance in a time of climate change. He writes a weekly newsletter called Schooling in Socialist America on this topic. 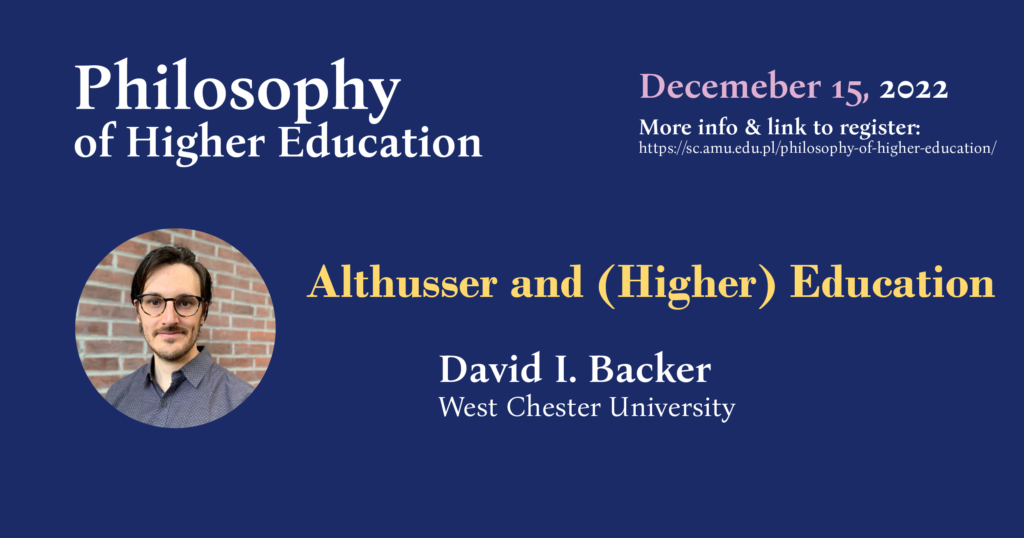 Fourth seminar: Fighting for hegemony in higher education: the actions of the Brazilian neoliberal think tanks

SCRG will host the fourth seminar in the series „Philosophy of Higher Education”. Our guest speaker will be Evandro Coggo Cristofoletti who will provide a talk entitled: „Fighting for hegemony in higher education: the actions of the Brazilian neoliberal think tanks.”

Registration required. Register in advance for this meeting: link

Methodologically, the study was based on literature review and document analysis. In the first procedure, a historical review of the formation and dissemination of neoliberal think tanks on a global, Latin American, and Brazilian level was outlined, seeking to identify how these organizations approached the field of higher education and mobilized academic knowledge to act politically. In contextual terms, it was addressed the implementation of neoliberalism in Brazil, as well as the growth of the so-called “New Right” in the last 10 years.

Empirically, the study was conducted through document analysis, utilizing sources from the studied organizations themselves (official websites, reports, texts, social media, videos, among other), focusing on two case studies: the Instituto Mises Brasil (Mises Brasil Institute), and  Students For Liberty Brasil. From this, it was identified how they have been acting in the field of higher education and science, especially in the last 20 years, in three scopes: acting within the Higher Education Institutions (teaching, research and outreach agenda), through the dissemination of opinions and arguments in public opinion, and seeking to influence higher education and science policy.

In addition, the Gramscian debates concerning hegemony and organic intellectuals were used for analytical purposes. As results, it is possible to state that, especially in the last ten years, liberal think tanks have been expanding quantitatively and qualitatively their initiatives aimed at the field of higher education and academia, contributing to the processes of commodification and privatization of higher education and public universities in Brazil. Also, the neoliberal think tanks have been seen the academic field as an important space for recruiting future specialists and organic intellectuals, aiming to use academic expertise to legitimize their political action and training undergraduate students to become future Brazilian political leaders; supported by narratives about “left indoctrination” in colleges and universities, as well as defending privatization agendas in higher education and science, liberal think tanks seek to insert their theoretical, political and ideological perspectives in the teaching, research, university extension and policy. 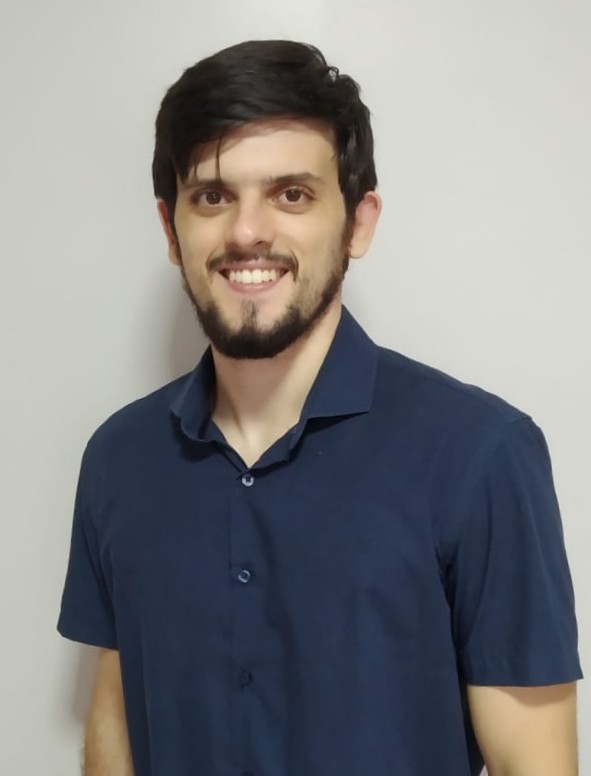 Evandro Coggo Cristofoletti. Researcher at the Department of Science and Technology Policy (DPCT) of University of Campinas (Brazil). PhD in Science and Technology Policy (Unicamp) and member of the Laboratory of Public Sector Studies at FCA-Unicamp (LESP-FCA) and Innovation Policy Analysis Group (GAPI-DPCT). Participates in the Centre for Higher Education Futures (CHEF) of the Danish School of Education and in Governance and Leadership in the Public Sector of the University of Agder (Norway). Develops research on the following themes: higher education policy, university-community engagement (university extension), academic expertise and public policy, societal impact of science and neoliberalism and higher education/academia. 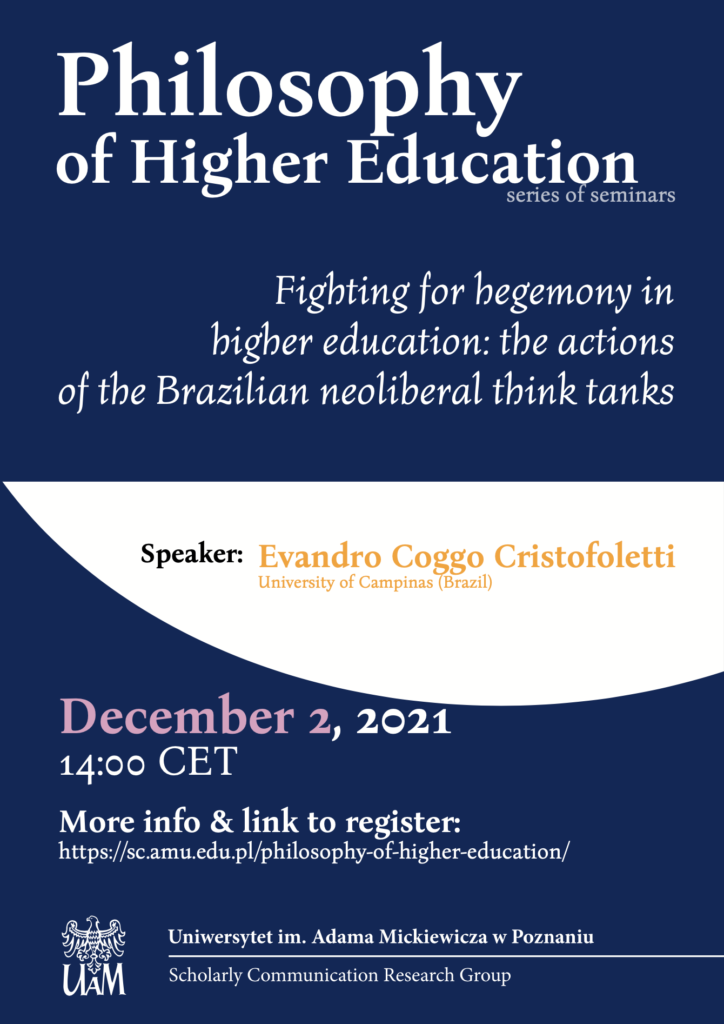 SCRG will host the third seminar in the series „Philosophy of Higher Education”. Our guest speaker will be John Preston who will provide a talk entitled: „Artificial Intelligence in the Capitalist University.”

Registration required. Register in advance for this meeting:
https://us02web.zoom.us/meeting/register/tZIucO6rqz8iEtXEX4xnNvuLe-p429lFtJqb

Artificial Intelligence (AI) is an over-burdened concept in the contemporary university.  Applications of Machine Learning (ML), algorithms, AGI (Artificial General Intelligence), learning platforms, MOOCs (Massive Open Online Courses) and virtual learning have become part of the language of education.  Rather than focus on the multiple forms of AI we should consider the ways in which it enables the capitalist university to increase profits and surpluses.

Like any other technology in universities, AI enables the continued subsumption and exploitation of academic work.  Academics often labour to produce huge ‘data commodities’ comprised of student and research ‘commodity stock’ which are socially validated as a monetary return from the government or private sector.  AI inserts the mind of the capitalist into academic work, animates and fetishizes performance (Pixarfication) and destroys concrete working times.

AI becomes understandable, even ethical, only through the logics of capital but it is ultimately just another way in which the capitalist university is destroying itself.  Rather than a technological, or post-human, future, the future of human education lies in grassroots, co-operative, communist, forms. 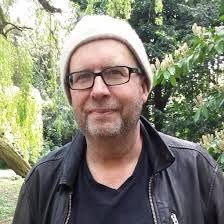 John Preston is Professor of Sociology, Department of Sociology, University of Essex.  His research is on disasters, existential threat, and education.  His latest book is “Artificial Intelligence in the Capitalist University: Commodification, and Value” (Routledge, 2021).  It is available on open access: 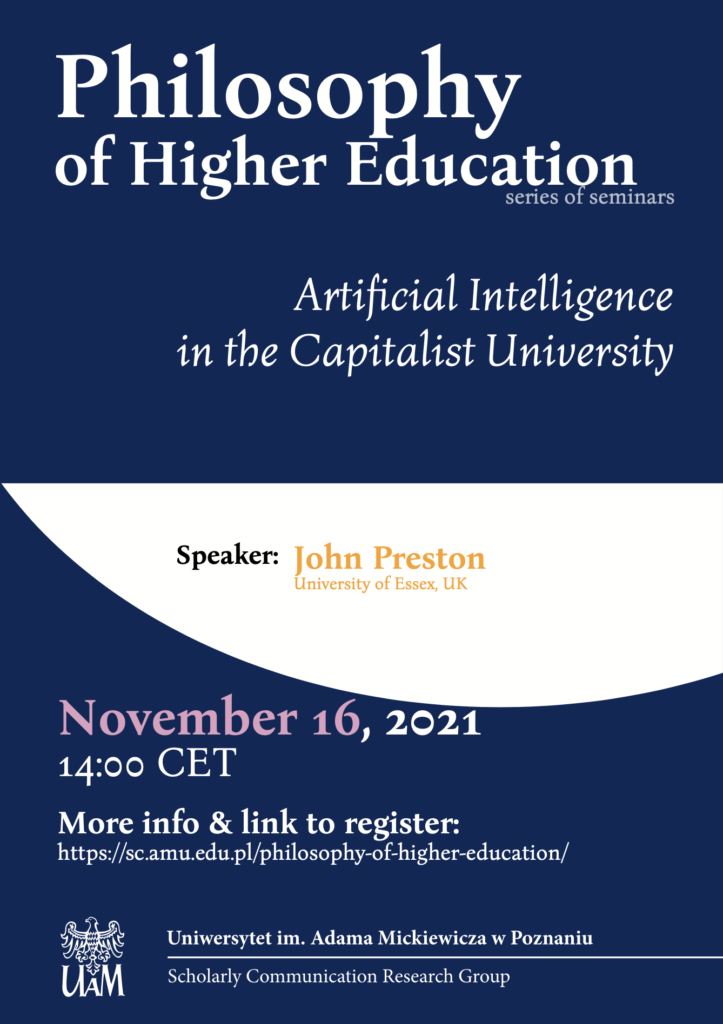 15 June 2021. The Hopeless University: Intellectual Work at the end of The End of History. Speaker: Richard Hall

Second seminar: The Hopeless University: Intellectual Work at the end of The End of History

SCRG will host the second seminar in the series „Philosophy of Higher Education”. Our guest speaker will be Richard Hall who will provide a talk entitled: „The Hopeless University: Intellectual Work at the end of The End of History.”

Abstract: Faced by the realities and lived experiences of intersecting crises, the University has become hopeless, in two respects. First, it has become a place that has no socially-useful role beyond the reproduction of capital, and has become an anti-human project devoid of hope. Second, it is unable to respond meaningfully with crises that erupt from the contradictions of capital. Thus, in its maintenance of business-as-usual, the University remains shaped as a tactical response to these contradictions.

The Hopeless University examines the structures/forms, cultures/pathologies and activities/methodologies of the University, in order to question what kind of higher learning we yearn for and deserve. In looking at the ways in which the University represents our entangled, intellectual existence, Richard Hall asks whether we might compost the structures, cultures and activities that engender hopelessness and helplessness. Might other modes of intellectual work and higher learning be possible?

In addressing this question, individuals and communities are invited to consider the potential for reimagining intellectual work as a movement of sensuous human activity in the world, and as a refusal of its commodification. As widespread social struggles against capitalism are revealed, we are reminded of our ability to make history. Thus, we must discuss how to reimagine and recycle intellectual work in society. We must discuss how to compost The Hopeless University as an indignant movement of dignity. 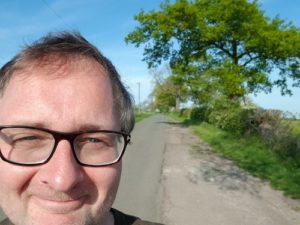 Richard Hall is Professor of Education and Technology at De Montfort University, Leicester, UK. He is a National Teaching Fellow and writes about life in higher education at: richard-hall.org 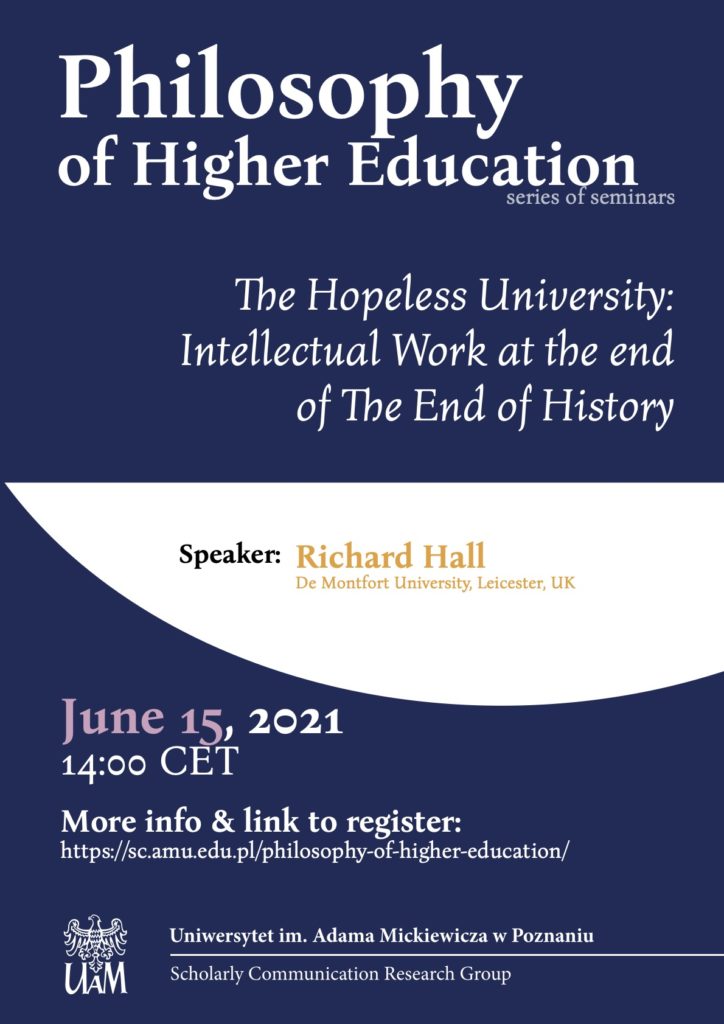 18 May 2021. The University and the Common. Rearticulating the Third Mission from the Bottom Up. Speaker: Hans Schildermans

First seminar: The University and the Common. Rearticulating the Third Mission from the Bottom Up

SCRG will host the first seminar in the series „Philosophy of Higher Education”. Our guest speaker will be Hans Schildermans who will provide a talk entitled: „The University and the Common. Rearticulating the Third Mission from the Bottom Up.”

Abstract: Policy discourses about the third mission of universities in the knowledge economy have placed the question regarding the relation between university and society again high on the agenda. The aim of this paper is to reconsider the university’s third mission through the lens of the common, thereby sketching an alternative to conceptualizations of this third mission in terms of either the public or the private. The starting point of this reconsideration is the story of the Palestinian experimental university Campus in Camps, and their practices of studying the camp, giving way to a series of social and spatial transformations within the camp and its neighboring area. The relation between university and society comes forward not as given or institutionally settled, but as enacted within practices, more particularly within practices of study. 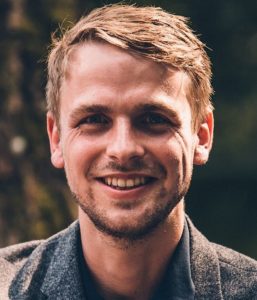 Hans Schildermans is a postdoctoral researcher at the Center for Foundations of Education (University of Vienna). He is the author of ‘Experiments in Decolonizing the University. Towards an Ecology of Study’ (Bloomsbury, 2021). 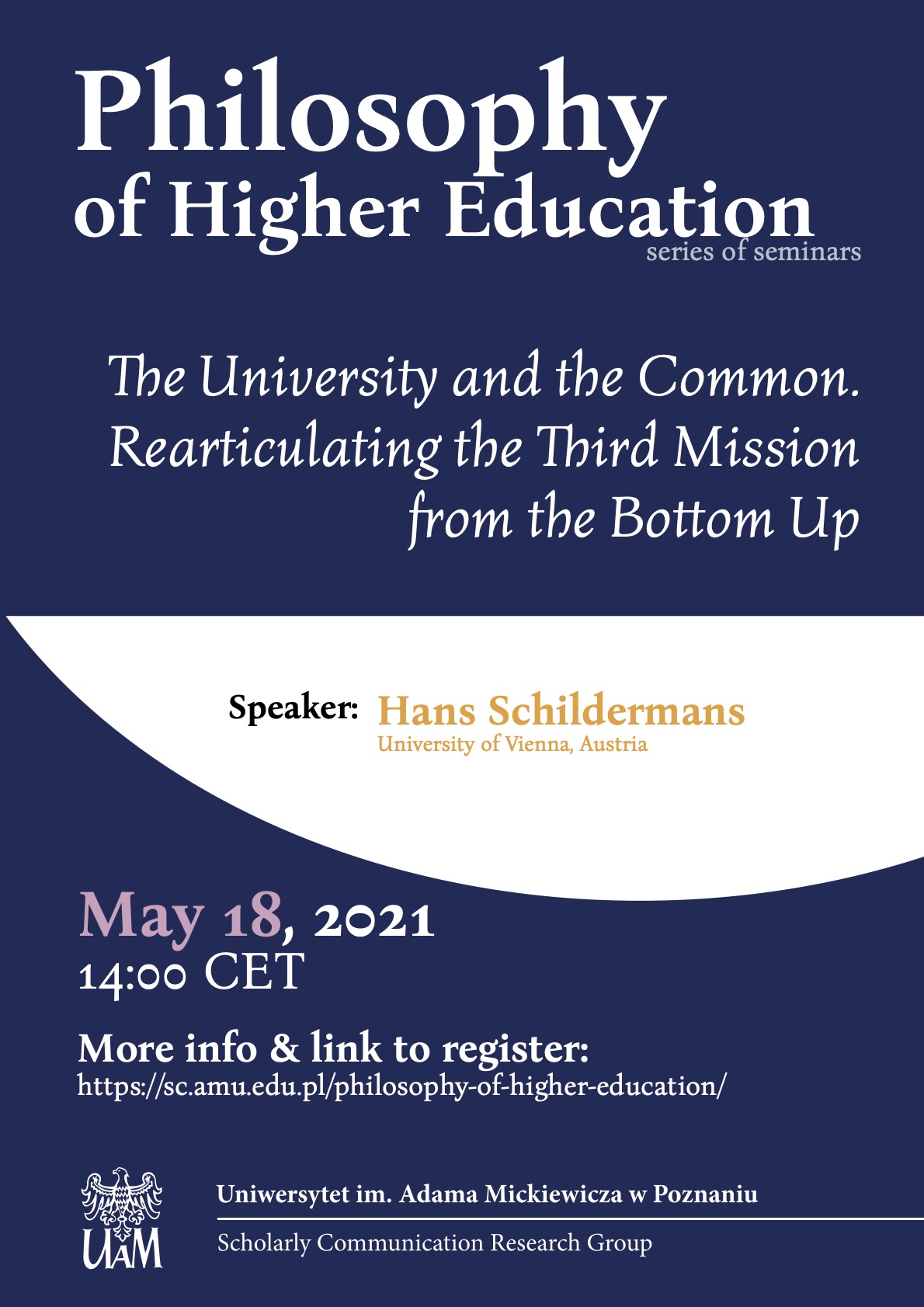